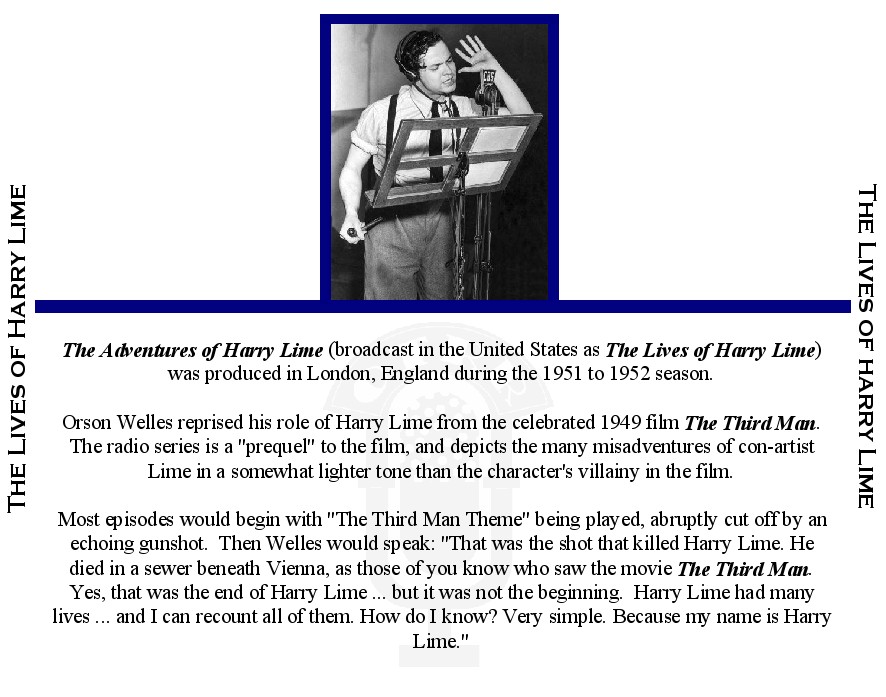 THE LIVES OF HARRY LIME

The Lives of Harry Lime was a British radio series that was produced in London by Harry Alan Towers. Called The Adventures of Harry Lime when first broadcast in Great Britain, the program featured Orson Welles as the title character, reprising his role from the 1949 cult movie, The Third Man.

The radio series was set before that classic film, and depicted Harry Lime's many misadventures as a con-artist. Most of the programs opened with haunting "The Third Man Theme" by Anton Karas being played, followed by a gunshot. Welles would then intone "That was the shot that killed Harry Lime. He died in a sewer beneath Vienna, as those of you know who saw the movie The Third Man. Yes, that was the end of Hary Lime. But it was not the beginning. Harry Lime had many lives... and I can recount all of them. How do I know? Very simple. Because my name is Harry Lime."

The program was the first independently-produced series that the BBC had ever broadcasted, though it did only acquire sixteen of the series' fifty two episodes. It inspired a Pocket Book of short stories based on scripts, including several reported written by Orson Welles himself. The several episodes "Man of Mystery," "Murder on the Rivera" and "Greek Meets Creek" feature plot elements that Welles later expanded upon in the 1955 motion picture Mr. Arkadin. From the Old Time Radio Researchers Group. See "Notes" Section below for more information on the OTRR.

Reviewer: Den NC USA - favoritefavoritefavoritefavoritefavorite - January 30, 2021
Subject: A must listen for OTR Fans, and Orson Welles Fans, and Fans of Crime Capers
Simon Callow, fine English actor and biographer, writes in ORSON WELLES Volume 3, One-Man Band, Chapter 5...
"At no point did Welles think of The Adventures of Harry Lime as anything other than a quick way of making a quick buck, though his performance is effortlessly charismatic: he remained an incomparable radio actor, engaging, witty, suggestive, with an extraordinary gift for creating instant intimacy with the listener. He usually wrote the introductory sequences himself. This Harry – affable, worldly-wise, wry, of course – is a much less hard-edged one that Greene's." (Graham Greene)
And one more quote by Callow..."He recorded several shows a day, sometimes as many as ten, urging on his little company of actors to sharp and credible accounts of their various shady characters. They often recorded in Paris, and the atmosphere was uproarious, with everyone playing two or three parts, while Welles bawled out colorful commentary on their work."

Wow, from this, and Welles, comes one of the great personality crime shows on radio. IMHO, none of these "capers" are a dud, and many are truly memorable. They can be charming, poignant, rife with intrigue and revenge, and always a step or two ahead of the usual.

Truly one of the best ever, and without doubt one of my favorites, The Adventures (Lives) of Harry Lime cannot be taken for granted.
In fact, perhaps he cannot be taken. He just might be taking you...

Uploaded by OTRRArchive on January 2, 2019